Housing Justice is Racial Justice: The historical impact of racial discrimination on access to housing.

Minnesota has one of the highest homeownership rates in the nation for white folks, while this rate is one of the worst in the nation for Black households.1 This is but one example of how systemic racism persists from the long history of racial discrimination and white supremacy in the United States.

Housing discrimination dates to the 1930s when communities built racial covenants to reserve land for white people exclusively.2 Maps like the one pictured here were colored based on the racial landscape of major cities in America. Banks and mortgage lenders then used these maps to reject loans for credit-worthy borrowers based on their race or location.3 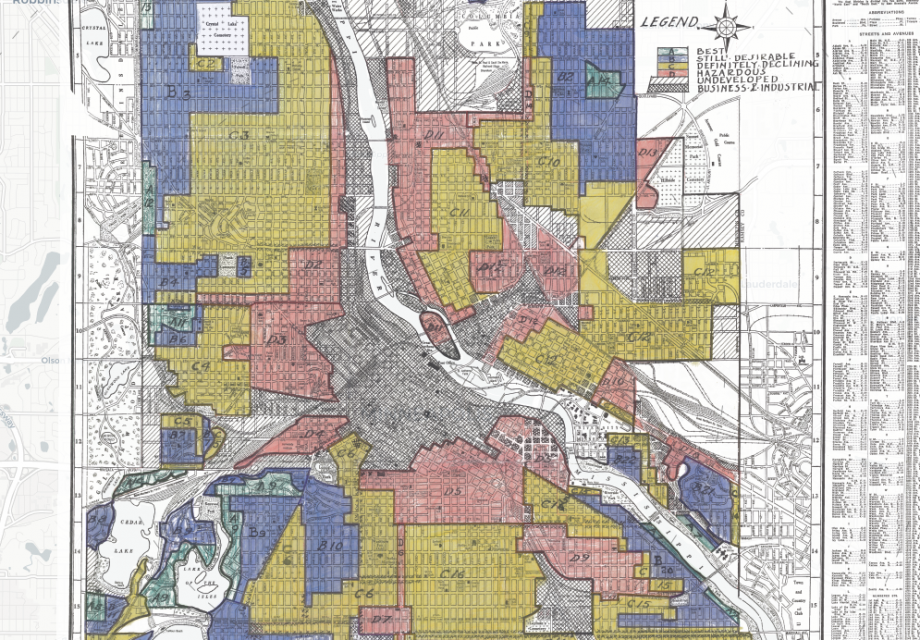 It was not until 1962 when the Minnesota State Legislature ended these discriminatory treaties and 1968 when they became illegal nationwide with The Fair Housing Act. While this was a step in the right direction, it did not repair the damage that had been done in keeping wealth-building tools like real estate from BIPOC (Black, Indigenous, and People of Color) communities. As well, it did not prevent individual lenders and sellers from acting from their own personal biases, which too often still exist today.

An oversimplified analogy of the historical impact of racial discrimination commonly used is with the game of Monopoly. Imagine playing Monopoly for 400 years, never being able to purchase property or collect $200 when you pass Go. Then one day, those restrictions are lifted, rendering you now “equal” to the other players. The other players who owned all the property and were always able to collect their $200 have built up so much wealth over the years that the rule change did not fix any economic disparity. Not only that, but the generations to follow inherited all the wealth of those players creating generations of economic disparity to come.

This explains why BIPOC communities have a higher percentage of their populations living under poverty levels than their white counterparts today. Of the total 382,621  individuals who make up the Black population in Minnesota, 26.8% live below that poverty line (2019). For our Indigenous communities, this figure is 30.2% and it sits at 14.9% for Hispanics.3   These are the same communities most likely to become long-term renters who also struggle due to low wages. Inherited housing disparities can result in greater instability when trying to afford monthly rent payments, resulting in evictions and homelessness. A study recently conducted by CURA – The University of Minnesota‘s Center for Urban and Regional Affairs – found that increased rent rates reflect underlying racism. Landlords raise rents at higher rates for African Americans across the Twin Cities than for any other groups.5

Racial Justice and Housing Justice are inextricably linked. At Urban Homeworks in 2019, 52% of renters and 55% of the people who purchased homes identified themselves as BIPOC.  In our vision of catalyzing powerful people by using equitable housing as a platform to build community, we use equitable housing as a platform to break up disparities by providing safe and affordable homes and integrating people-oriented development (POD). We are passionate about eliminating housing disparities and elevating the voices of BIPOC communities to create solutions from within their neighborhoods.

In addition to centralizing the community in our work, we are actively working toward becoming an anti-racist organization. We are committed to providing opportunities for our staff, volunteers, supporters, and the broader community to learn how to take ownership over the role we can play in dismantling systems of oppression. One way that we are going to be doing this is through regular emails that prompt you to Take Action. If you would like to be included on our list to receive periodic Take Action emails, please visit this link to sign up.

Urban Homeworks’ Statement on the Murder of George Floyd

On Monday, May 25th, George Floyd was murdered. And since Tuesday afternoon, Urban Homeworks staff and community has been in collective grief, anger and despair. We apologize for our silence. Our silence was not out of confusion or lack of need for justice or disinterest in getting ourselves involved or taking a stance. Our silence has been reflective of a deep pain and exhaustion from the continuous disregard for Black lives by police, and the continuous apathy and silence by too many of our white-bodied brothers and sisters.

This week we have the opportunity to hear from our Finance Director as she reflections on the past month as well as her hope for when this pandemic subsides.

Over the past month, the words “unprecedented, uncertain, and unusual” have been used a lot. These are words that never cease to cause me to pause. Personally, I thrive in situations where the “un” has been removed from those words; I like to be certain, predict, and study the situation until I understand it. What has hit home most through my reflection of the past month is that removing the “un” is a privilege I’ve enjoyed in many circumstances, or maybe it was an illusion that I could do those things at all.

An update from our Executive Director

The necessity of perpetuating the hope of Jesus Christ.

We want to take a moment to update and remind our community of the importance of coming together (even though coming together looks different currently as we practice social distancing.) The mission of Urban Homeworks is to perpetuate the hope of Jesus Christ through innovative community development. As we adapt and make changes to our everyday lives to keep ourselves and others safe, our mission is more relevant than ever.

Welcome to our 25th Anniversary! 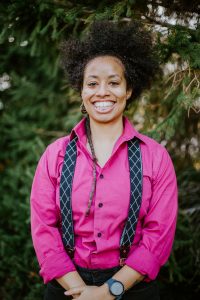 It is a considerable understatement to say that without you, we would not have made it this far. The work of our mission: the work of hope, the work of community-building – the work of sustainable, affordable housing – requires the attention, support, and investment, of the many to succeed. 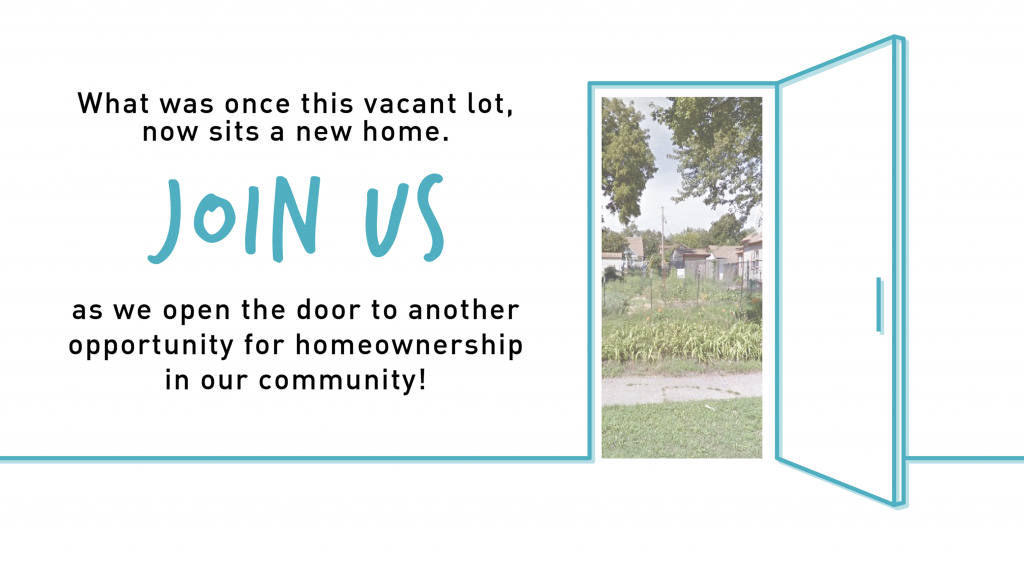 Urban Homeworks is hosting an open house!
1317 Thomas is getting closer to completion & before it hits the market we would like to take this opportunity to share first hand the work that we do.

This home has been built in partnership with the University of Minnesota NorthernSTAR Building America Team, who also partner with the U.S. Department of Energy. It has been built with studless walls with the aim of increased energy efficiency, airtightness, and construction quality as compared to typical wall construction methods.

View a time lapse of a similar project here: https://www.youtube.com/watch?v=wFP0dJh6J9w&feature=youtu.be 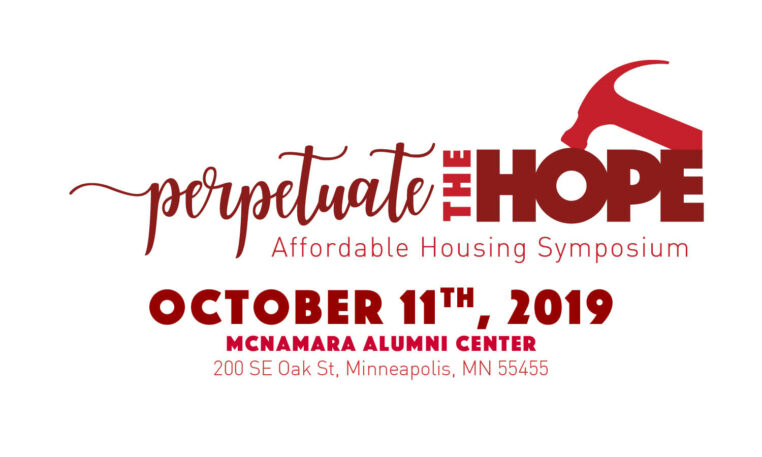 We are excited to announce the date for Perpetuate the Hope Symposium 2019.

The Perpetuate the Hope Symposium brings together the Urban Homeworks community of supporters, residents, and volunteers to connect, learn, and give to the advancement of dignified, affordable housing.  Hear from leaders and activists across the state working towards affordable housing solutions and enjoy an inspiring lunch program to raise awareness and support of Urban Homeworks’ vital programs.